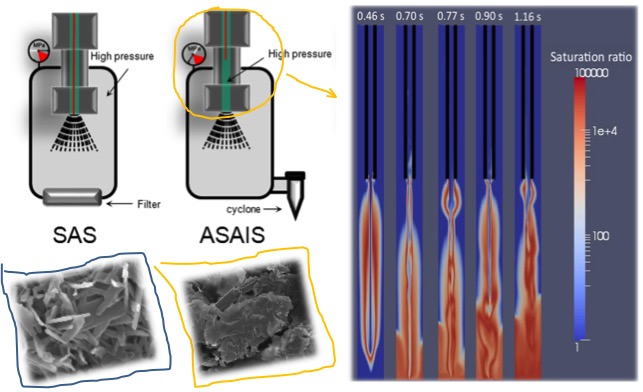 Technology for particle design using anti-solvent properties of supercritical fluids can improve the stability and delivery of pharmaceutical drugs. For example, different crystalline structures (polymorphs) of pharmaceutical drugs can have different properties, such as solubility, compressibility, melting point, etc, which can optimize production and formulation.  However, processing with supercritical fluids typically required a new factory (SAS process), with large high-pressure precipitators. We have discovered that the process could be much simplified by confining the high-pressure only for what is needed. Basically anti-solvent supersaturation can happen inline in a very small static mixer (less than 1 mL) - as shown by CFD modelling.  Instead of a new factory we propose a supercritical nozzle (ASAIS process) that can convert a classical spray-dryer into a “supercritical machine”. 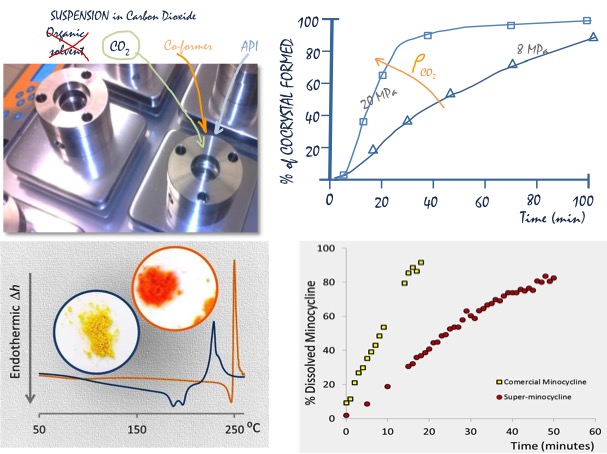 Cocrystals are an emergent field in Chemical-Pharmaceutical technology. It is long known that polymorphs can have distinct properties, which make a critical diference in solubility (or bioavailability) of pharmaceutical drugs for example. The problem is that the crystal lattice of a substance cannot be rationally designed for a specific improvement, which is the major advantage of cocrystals. Cocrystallization is basically a crystalline structure made of 2 (or more) different molecules that can share hydrogen bridges. Therefore, one of the molecules (as the active principle) can be cocrystallized with a second molecule (excipient) that has complementing properties, enabling a more  rational approach to its solid state chemistry. We have demonstrated that CO2 can be an excellent tool for crystal engineering because it promotes recrystallisation and it is very easily separated from the products, because it is a gas at atmospheric pressure. Moreover, the substances do not need to be dissolved in the supercritical phase, instead, suspending the raw particles in CO2 for a few hours (depending of CO2 dentity) is enough to convert them into new polymorphs or cocrystals. Traditional chemical technology using CO2 has been based on its solvent power, which is very low, resulting in large and cumbersome systems (or chemical plants). In this case, a relatively small amount of CO2 is enough to promote molecular recognition. Above is shown one example of a novel crystal discovered using CO2. This "super" minocycline can be paced in the top 3 of high-temperature stable antibiotics (50 ºC increase in melting point) and has extended release properties (for which a patent was granted).

Particle design is important to overcome stability and bioavailability issues in pharmaceutical industry. Micronization, cocrystallization and encapsulation of the active molecules are available strategies to formulate new drug candidates. We have recently shown that these 3 strategies can be enabled and controlled by using a single step process  - Supercritical Enhanced Atomization (SEA). Spray-drying processes are already established as reliable alternatives for particle design, however they typically produce amorphous solids due to the fast drying at high temperature. Therefore, subsequent recrystallization is required to control the crystallinity (and properties) of the final product. The enhanced spraying produced by CO2 has two major advantages in this regard: first CO2 induces nucleation or (co)crystallization of APIs by anti-solvent action, even for short contact time, moreover, it also cools abruptly upon depressurisation further favouring growth of the crystalline phase before drying.  A solution containing the co-crystal formers and a lipid was processed by SEA and the drug was effectively co-crystallized and encapsulated (dispersed) in lipid micro-particles. This suggests that the crystals formed before the lipid condensation and drying. Various drug-lipid ratios and processing conditions enabled an extended control over particle size and ultimately over drug’s dissolution rate.  SEA was also able to produce multiple cocrystals of a model drug substance, suggesting it to be a very effective cocrystal screening tool. A vaccine was also successfully prepared using this technique. 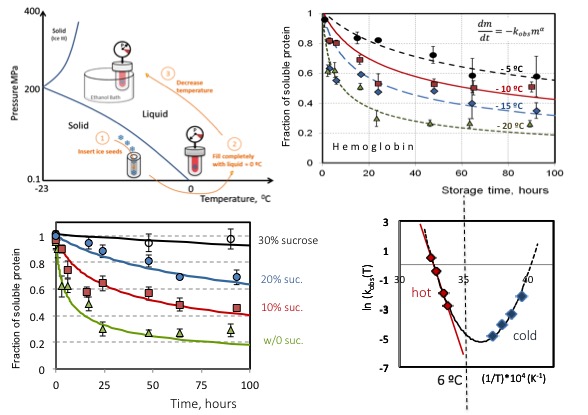 More than 20% of the pharmaceutical drugs are already recombinant proteins and their tendency is to reach 80% in the next couple decades. Cold processing (including freezing) is critical for large-scale production and global distribution, however protein degradation within the ice structure is still little understood and unpredictable.  Freezing is very complex and causes proteins to dehydrate, concentrate (10 or even 100 times), adsorb to ice, buffer salts and excipients are likely to crystallize, pH drops, etc. It is difficult to understand protein stability in this complicated setting. To understand the impact of low temperature on protein reactions, one should be able to cool solutions without freezing, which is what we have done. Basically, water must expand to freeze, therefore, if the volume is fixed temperature can be lowered to -23 ºC without freezing. Using this isochoric method (illustrated above) we have demonstrated that protein aggregation rates increase with decreasing temperature, contrarily to common expectations, unveiling that cold denaturation is a major cause for protein degradation in cold chains. Cold denaturation has been theorised  previously however; our work is the first clear experimental demonstration of its impact on protein aggregation. The “cold stability” data accessed by the isochoric method proposes a paradigm shift on current practices for “accelerated formulation studies”, which require significant extrapolation to estimate cold-aggregation from high temperature data – with the risk of significant error (as illustrated in red for 6ºC) . No more extrapolations are needed, hot data can be combined with cold data to model the kinetic rates in the full temperature range. This method can also clarify the true nature of cryo-preservatives (or supposed) - such as sucrose.