The project presents an innovative opportunity to develop a process aiming at the waste water valorization by transforming it into a source of nutrients resource, essentially for the agri-food sector but with applications in new industrial solutions. Thus, from the conversion of  waste water (urban, livestock and agro-industrial effluents)the project will create three new lines of final products for animal feed/nutrition and plant nutrition, fuel, plastics and pharmaceutical industries.

2020-21
Producing methanol as sustainable fuel by coupling CO2 capture and hydrogenation
The proposed work aims to develop a technology that take full advantage of Portuguese surplus renewable energy (wind and hydro energy) and convert it into methanol (MeOH) as sustainable transport fuels. This surplus power-to-fuel technology is enabled by coupling CO2 capture with CO2 hydrogenation to MeOH using H2 generated from renewable resources.

Programme for Cooperation in Science between Portugal and Poland

Design of new heterogenized rhodium catalysts for sustainable hydroformylation of olefins and oxidation of alkanes
The project aims providing sustainable catalytic processes for hydroformylation (the most important industrial transformation for olefins valorization) and for organic oxidative synthesis from linear and cyclic alkanes (invaluable precursors for a wide range of synthetic targets), with significant advantages over the current industrial processes in terms of safety, simplicity, energy saving, economic and environmental concerns. To accomplish that, novel Rh catalysts (complexes / immobilized complexes) will be prepared and characterized. Follows the evaluation of their suitability to act as efficient and reusable catalysts for the important industrial oxidation reactions chosen (olefin hydroformylation and alkane oxidation) and the fine-tuning of their catalytic activity by optimizing operatory conditions for those reactions and by designing new catalysts. The overcome of scientific and technological hurdles on the way to industrial scaling-up will be also considered. 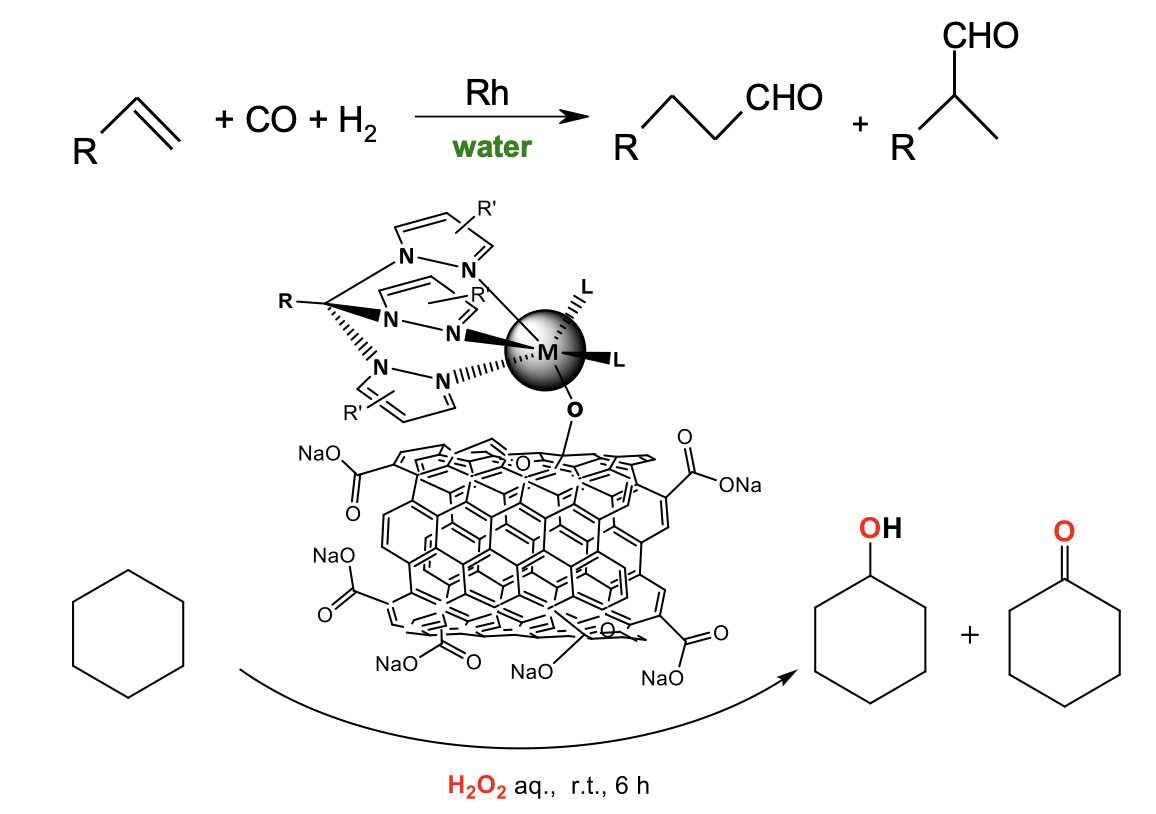 This project aims to provide novel magnetic ionic liquids (MScorpILs) and fluids (MScorpIFs) based on metal C- or B-scorpionate catalysts to design improved  catalytic processes for selective oxidation reactions of industrial interest i) the oxidation of cyclohexane to the cyclohexanol/cyclohexanone mixture and ii) the one-pot oxidation of ethane to acetic acid. 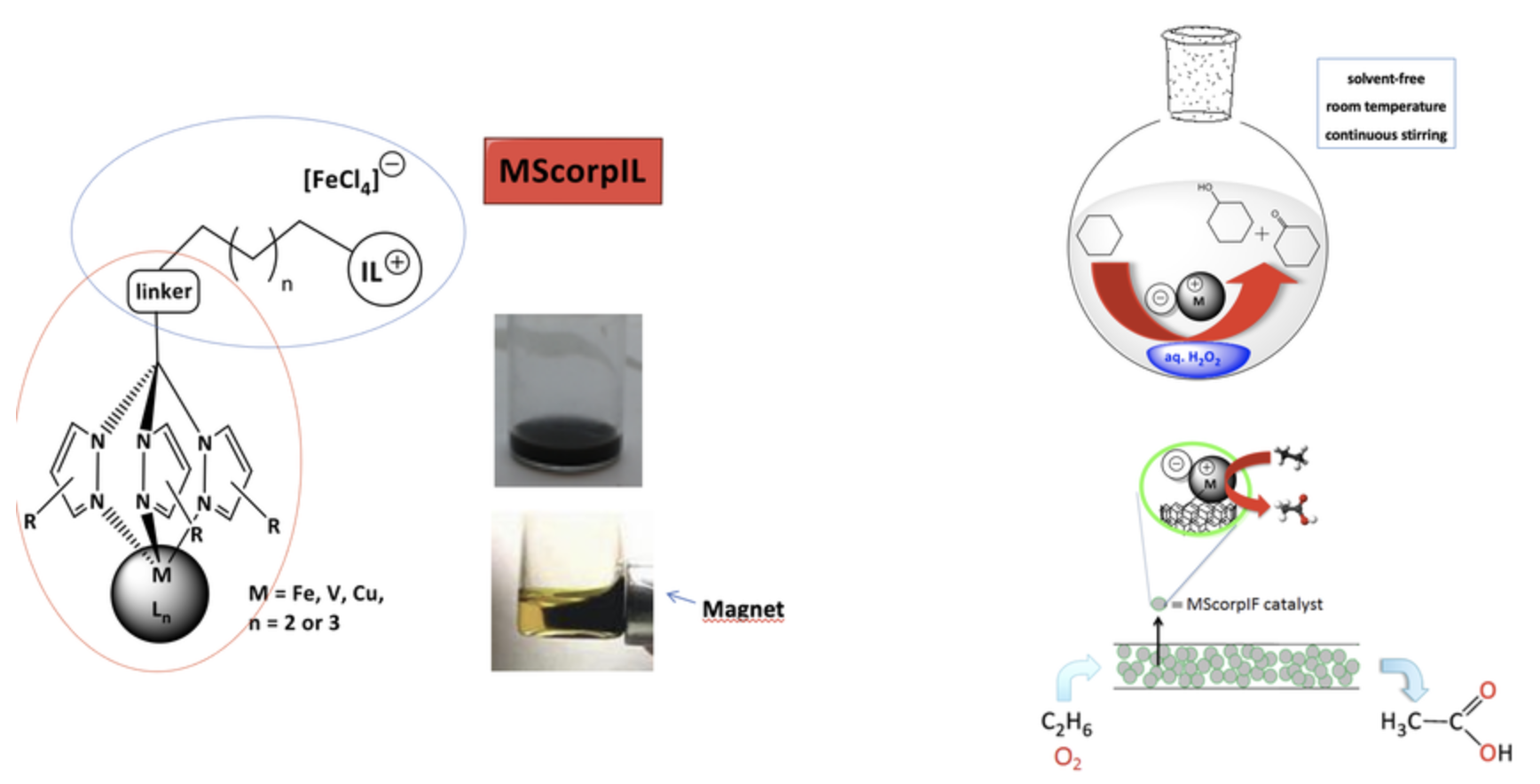 This project aims to obtain financing for protection and economic valorization of the rights of intellectual property associated to the use of an efficient and recyclable catalyst consisting on an hybrid material, based on the dichloro hydrotris(pyrazol-1-yl)methane iron(II) complex anchored on carbon nanotubes functionalized with carboxylate surface groups, to be used in the partial oxidation of secondary alcohols to the corresponding ketones with t-butyl hydroperoxide, without the addition of solvents and using low power microwave irradiation.

This project aims to immobilise homogeneous complexes (namely functionalized C-scorpionate gold complexes and the N-heterocyclic carbene gold(I) complexes onto heterogeneous supports (carbon materials, such as activated carbon, carbon xerogel, carbon nanotubes, and even nanodiamonds (which with regard to chemical and mechanical resistance probably represent an extraordinary support; and metal oxides, like silica and alumina). Those hybrid materials will be tested as catalysts for important industrial reactions like alkane or alcohol oxidations and well investigated and established reactions in homogeneous gold catalysis like the addition of nucleophiles to alkynes or the phenol synthesis.

This project aims to provide novel carbon nanomaterials (CNM) produced from cork industry wastewater to design improved catalytic processes for selective oxidation reactions of industrial interest, in particular i) the oxidation of cyclohexane to the cyclohexanone/cyclohexanol mixture (KA oil) and ii) the oxidation of primary and secondary alcohols to, respectively, aldehydes and ketones.

2018-22: PTDC/QUI-QIN/29778/2017 - Straightforward Synthesis of Multifunctional core-shell composites and their applications
The main aim of this project is to find easily scalable procedures for the cost-effective preparation of multifunctional core-shell composite materials. Viability of the prepared multifunctional dispersed materials will be tested in catalytic multistage one-pot reactions, smart corrosion protection, dynamic catalysis (induced activation of the catalytic particles with electromagnetic waves of different frequencies) and in the catalyst recovery.