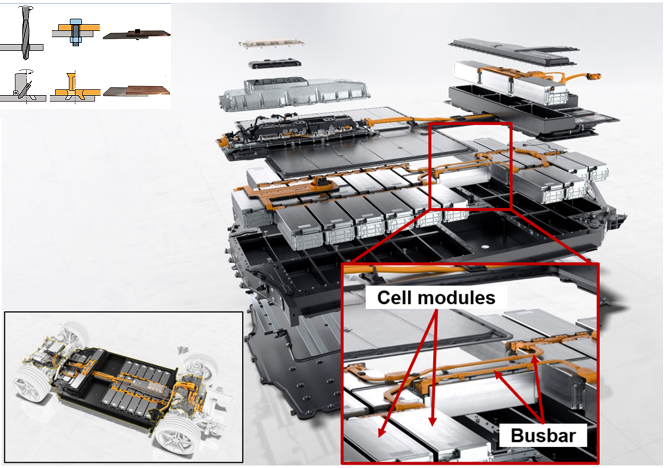 The changes of the automotive market and their effects on industry are nowadays hot topics in metal forming seminars and conferences around the world. The rise in the number of electric vehicles will inevitably lead to a decrease in the demand of components for combustion engines and power drive trains. Typical forming components such as pistons, connecting rods, valves, camshafts, crankshafts, multi-speed gear boxes and others that exist in diesel or petrol vehicles, will no longer be required.
However, the lightweight construction requirements for the body-in-white of electric vehicles, the production of components for asynchronous motors and the fabrication of busbars are bringing new challenges and opportunities for the metal forming industry (Weberpals et al., 2015). This project proposal is focused on busbars, which are metallic strips or sheets produced by forming (stamping) in different shapes that are utilized to distribute electric current to multiple equipment such as the electric motor drive and the AC/DC converter, among others. Busbars circumvent the use of complex wire and cable connection systems (Chapman and Norris, 2014) in electric vehicles, help dissipating heat and prevent overheating of circuits due to large electrical power drawn, and are used to assemble large capacity battery banks made from individual cells.
The challenge and opportunity this project aims to embrace has to do with the fact that busbars (like electric power wires) are almost always made of copper due to its excellent conductivity and malleability. However, copper is heavier and significantly more expensive than aluminium, which is also a good electric conductor. This is critical for the automotive industry and explains the interest in fabricating hybrid busbars that make use of both copper and aluminium.
However, hybrid busbars come at a price of connecting copper to aluminium by means of existing joining technologies such as fastening and welding, which are difficult or not possible to be employed as electric vehicle power applications become smaller and significantly more complex. In 2019, the principal investigator (PI) addressed the challenge of producing hybrid busbars made of copper and aluminium (Pragana et al., 2020). First steps were then given towards the development of a new joining by forming process that combines partial cutting and bending with joining by compression, to produce a mechanical form-fit joint between copper and aluminium sheets. The new joining by forming process avoids material protrusions above and below the sheet surfaces, which is critically important for dealing with the increasing space limitation of new-electric vehicle power systems and to optimize the electric current flow in the busbars. However, the above mentioned development was part of an exploratory work that made use of sheets of equal or comparable thicknesses. The principal investigator is convinced that this new line of research must be supported in order to fabricate hybrid busbars on sound theoretical and experimental basis and to avoid design guidelines exclusively based on accumulated knowledge from trial-and-error procedures, even for fabricating the simplest busbar.
In view of the above, this project was designed to provide the following contributions to science and technology of materials processing. Firstly, to provide new joining by forming processes to produce hybrid busbars for electric vehicles and for electric applications, in general. Secondly, to obtain a clear understanding of the deformation mechanics of the new processes and of their workability limits and typical failure modes, by means of a combined theoretical and experimental investigation that will make use of finite element modelling and experimentation in flexible tool systems, to be designed and fabricated by the authors. Thirdly, to investigate which materials (copper or copper-aluminium) should be employed for obtaining the best electric and formability performances at a lower cost, and to compare the electric contact resistance of the new hybrid busbars produced by joining by forming against those produced by fastening or welding. Fourthly, to determine the pull-out, shear and fatigue strength of the hybrid busbars produced by joining by forming and by conventional fastening or welding. Fifthly, to move towards industrialization by producing hybrid busbars in collaboration with a Portuguese SME that fabricates automotive components.
The background of the research team members in numerical and experimental joining by forming technologies, their experience in the project, design and fabrication of tool systems and their collaboration with leading international scientists on metal forming and welding provide the necessary background for fulfilling the aims and objectives of this project.