The study of matter in extreme conditions of pressure, density and temperature, from the core of massive planets to igniting inertial fusion plasmas, requires ultrafast and highly-resolved diagnostics, and is currently pushing the limits of ultrafast imaging. In this colloquium, we will see why to see the ultra-small, and record the ultra-fast, X-ray pulses below the femtosecond (1e-15 s) range are needed.

Ultrafast X-ray imaging has only become possible with the 21st century revolution in X-ray sources. These new sources, that can range from a km-long accelerator-based laser in world scale facilities, to a tabletop system here at IST, are as short as attoseconds (10-18 s) in duration. Yet they are sufficiently bright to record pictures of matter undergoing ultrafast changes in a single frame, opening exciting prospects for electronics, plasma laboratory astrophysics, and even structural biology. For the first time, we are now able to record movies of atomic movement, electron clouds and electron-electron scattering in real-time.

In this talk I will review some of the most important developments in coherent X-ray sources and describe how we are working on these sources to make them shorter and brighter, and using them for ultrafast coherent imaging of exploding plasmas.


During the last decade the interdependence of function and structure of proteins became more and more obvious, as well as the need for techniques to study this relation at the single molecule level. Beside Scanning Probe Techniques, optical techniques came back as major player to the field of cell biology, acknowledged with a Nobel Prize in 2014. The combination of both techniques is the most powerful approach we have today to study how molecular structure provide specific function, in the context of a living cell, by undergoing a well defined and controlled sequence of structural changes. The timeline of such structural changes is essential and only can be studied at the single molecule level or the measurements will get blurred by the distribution of molecules at different stages of the process, unavoidable due to thermodynamic principles. Thermodynamics on the other hand provides a very effective way to evaluate measurements at the single molecule level and in this way to understand structure and function relation.

"From College to Corporate"


How to be a Physicist on a Corporate environment?
In a traditional competences-based work environment, experience comes before the hiring, so if you’re not experienced in the field that you’re proposed to work for, how will you do it?
Making a deep analysis on do and don’ts, looking for the skills needed for each role that I wanted to apply for, and showing that you can acquire the needed competences by activating your skills, was my survival strategy. My Physics background did not block me, instead it empowered me to be the unicorn on the IT world that I’ve been working for almost 20 years. 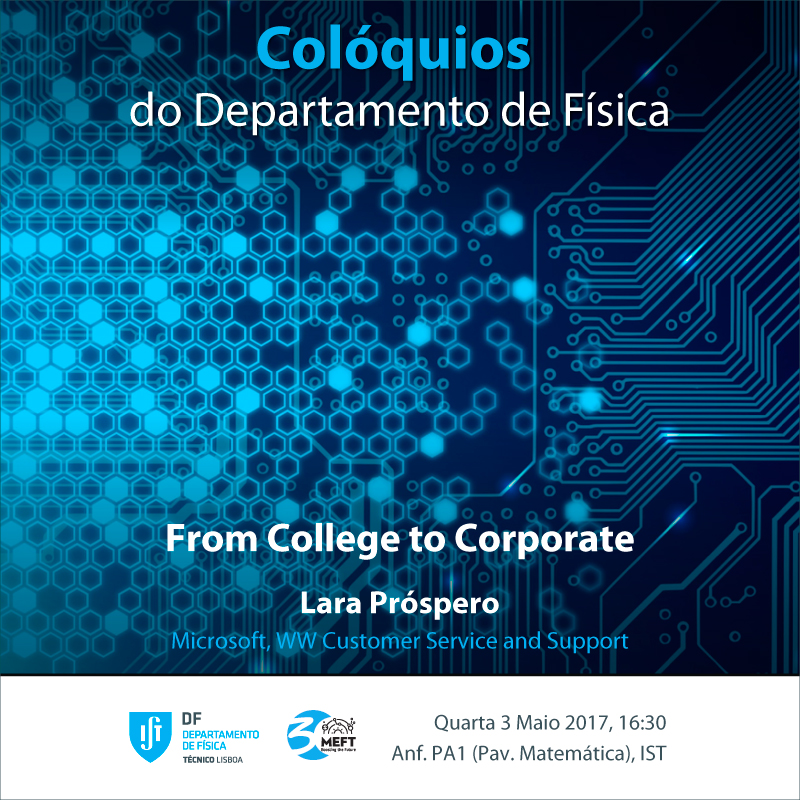 
Ultrashort laser pulses, whose durations approach the timescales of fundamental atomic and molecular processes, have revolutionized a wide range of scientific domains. Because they are able to deliver energy in the form of light almost instantaneously, they have given rise to the new field of ultrafast science.
Light pulse synthesis, or shaping in a custom way the electric field waveform of these laser pulses, opens the door to a precise control of physical processes at these extreme scales. This approach has enabled a whole new generation of techniques for producing new forms of radiation, from terahertz frequencies to attosecond pulses and optical vortexes.
In this talk I will review some of the most important developments and applications of this concept and discuss some interesting prospects in different scientific fields. 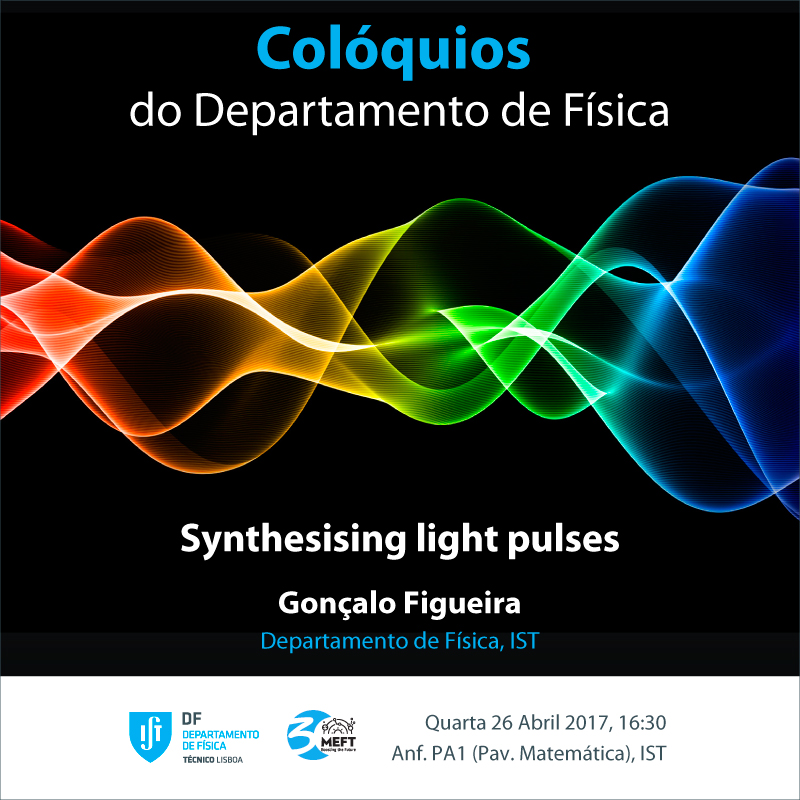 "The heart of matter"


Nuclear science is a broad and diverse subject.
From the hot dense soup of quarks and gluons after the Big Bang, up to the formation of protons and neutrons that started the evolution of the cosmic chemistry, the physics of nuclei is crucial for our understanding the universe. At the same time, it is intertwined in the fabric of our lives, from applications in industry, medicine, space and advanced material science, to complicated nonproliferation issues and national security.
Nuclear Physics explores the strange world of the heart of matter, and addresses overarching questions that also reach out to other areas of science, and define nuclear physics today.
I will give examples of inspiring questions and methods, both from the theoretical and the applied viewpoints. 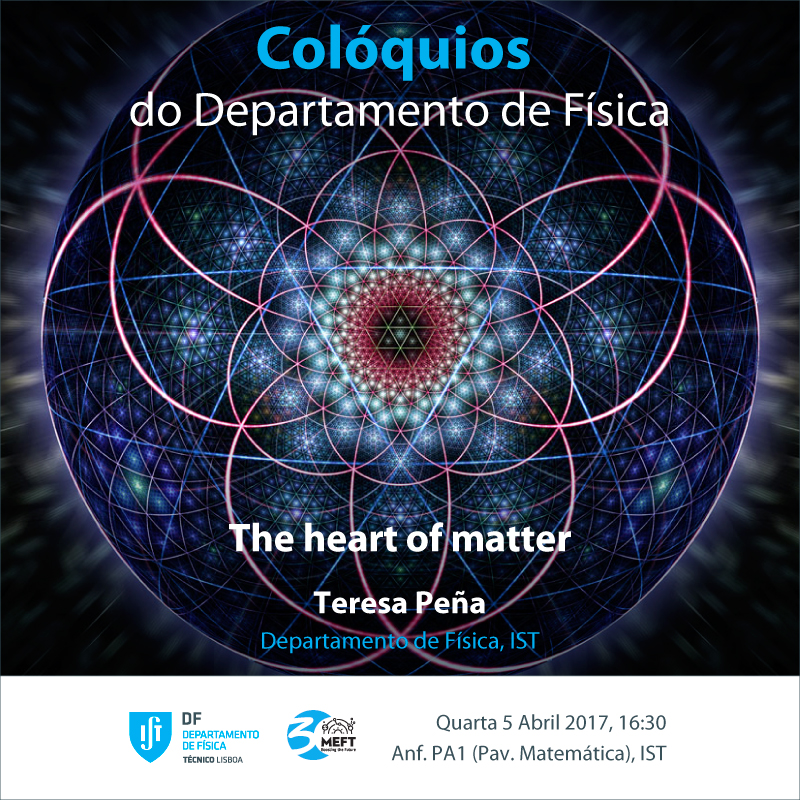 
Observations of the early phases of the evolution of our Universe have recently gained hig precision and accuracy. The surveys of the Cosmic Microwave Background (CMB) observed the recombination epoch (13.7 billion years ago, 380,000 years after the big bang) which is the deepest possible source observable using electromagnetic waves. The feeble structures visible in the maps of the CMB are the result of a sequence of physical processes happening during the "primeval fireball” phase of the evolution of the universe, and can be used to constrain the geometry, composition and evolution of the universe.

After a review of the relevant physics, we focus on the observations, describing the custom instrumentation developed to this purpose, including mm-wave detecotors, space-borne telescopes, and sophisticated analysis techniques. We finally describe the impact of these and of future CMB measurements for our knowledge of cosmology and fundamental physics. 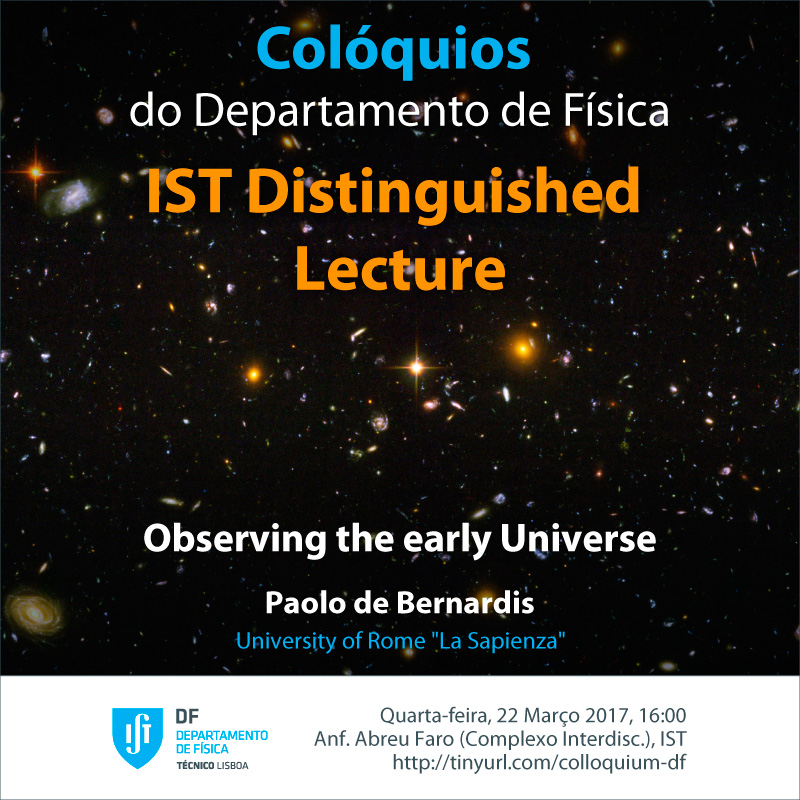 
ABSTRACT:
I offer a personal perspective of several types of new carbons and related materials that appear to me to be “on the horizon”. These include sp3-rich carbon materials, diamond possibly made by new approaches, ‘diamane’, and ‘negative curvature carbons’. Our conversion of large area polycrystalline metal foils to large area single crystal metal foils allows us to pursue one strategy to attempt to achieve diamane, as well as large area single crystal graphene and h-BN. 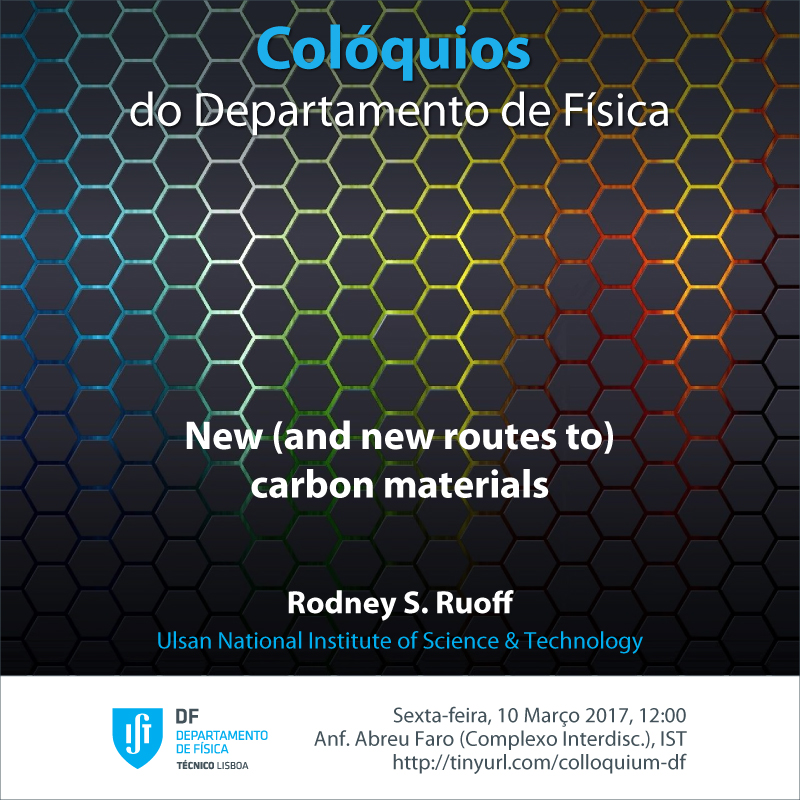 "In silico plasmas under extreme conditions: from particle accelerators to pair plasmas in pulsars"


The advent of ultra intense lasers and particle beams is opening new frontiers in physics by triggering the exploration of scenarios with unprecedented extreme conditions dominated by relativistic effects ranging from plasma based accelerators and intense light sources to collisionless shocks and the magnetospheres of pulsars. In some of these conditions, even QED effects play an importance role, with the production of hard photons and electron-positron pairs. These scenarios are highly nonlinear and can only be fully captured via self consistent ab initio massively parallel kinetic simulations.

I will revise some of the most important advances and the open challenges in the field, illustrating how large scale numerical simulations are helping us to capture in silico these extreme laboratory and astrophysical environments. 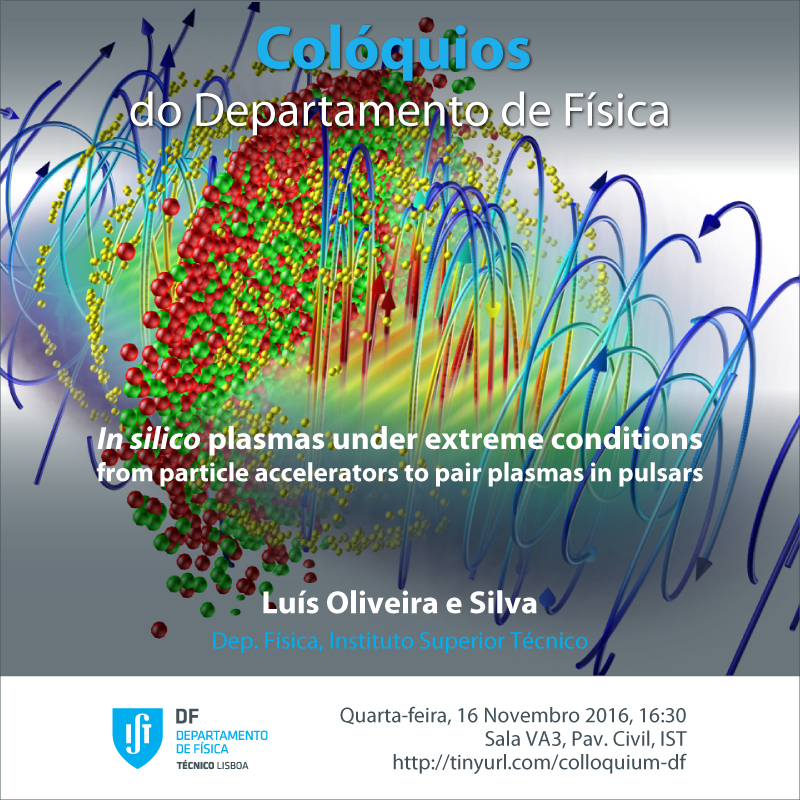 
At the Computational Genomics Laboratory we study the evolutionary cell biology of intracellular compartmentalisation, using mostly computational approaches. While our work is very basic, the use of formal, quantitative approaches has led to interesting translational developments in the context of human health. I will discuss some of these more formal aspects of our work, part of which have been developed by graduates from the Physics Engineering degree at the IST. 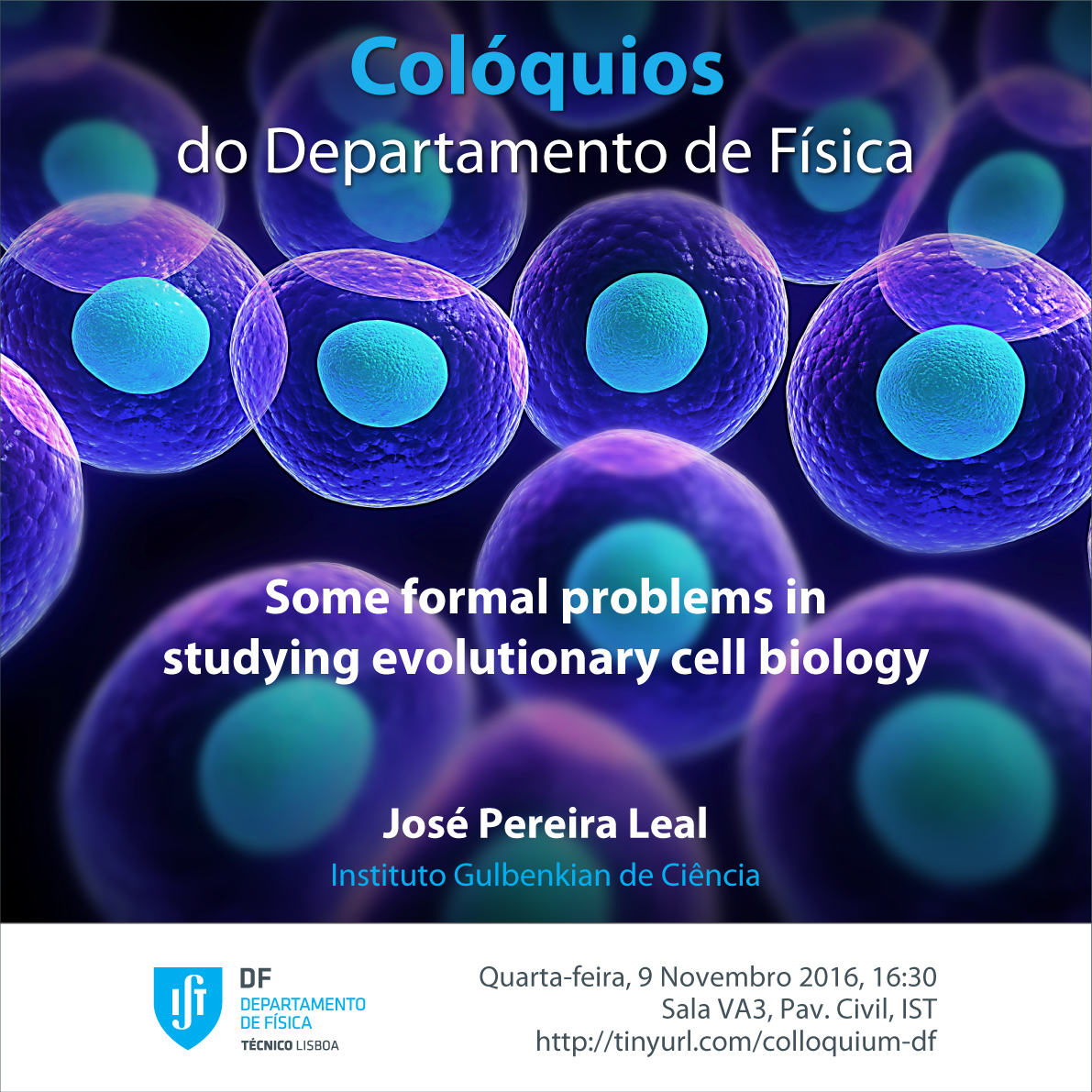 "Gene splicing in evolution and disease"

Our lab studies the mechanisms responsible for the association between aberrant splicing and disease. We develop computational biology approaches for the analysis of molecular information to consolidate our hypotheses for the deregulation of alternative splicing in different pathologies, namely cancer and neurodegenerative disorders. In this talk, I will outline some of our most recent findings.

"From physics to safety critical engineering"


ABSTRACT:
It is generally accepted by the public that airplanes (and trains, for that matter) are very reliable and safe machines. Why is that and what is behind this fact? Safety-critical engineering is, along with solid processes that determine everything in this kind of product's life cycle. From concept, to development, to prototyping, to testing, to production, operations, maintenance and disposal, safety-critical engineering practices are in place to assure that an airplane (or a train, or a car) will perform as specified and as expected, and that it is intrinsically as safe as possible.

In this presentation we will show a broad overview of what safety-critical engineering is, how it touches many aspects of our lives, and how it affects the way many systems are developed. Going into more detail, we will then dedicate some time to the specifics of embedded systems and how these play a key role in the safety of many of these systems. Finally, some specific examples will be presented on work that has been done by Critical Software in this field, and on how the knowledge and specific capacities of engineering students from physics (and other related engineering subjects) are important to this kind of work. 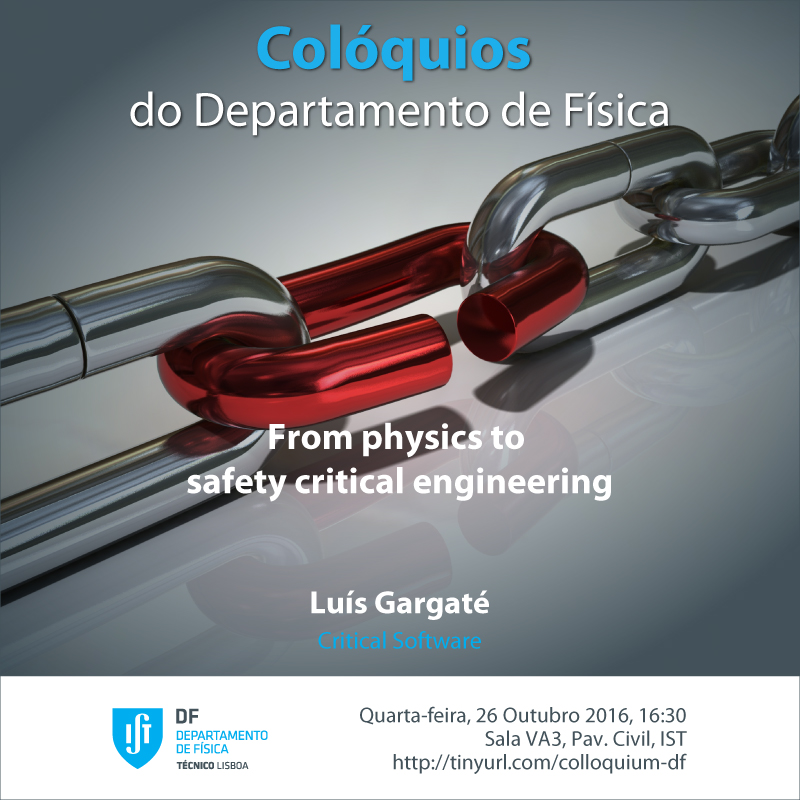 
ABSTRACT:
The world population is exposed to several types of natural hazards and has experienced an increasing impact of disasters in the past decades. An overview is given of the use of satellite remote sensing data and image processing techniques to map and monitor hazards such as earthquakes, floods, volcanic eruptions, and landslides, and the damages associated with each. In particular, operational services focused on the rapid provision of space-based information for disaster response are presented. 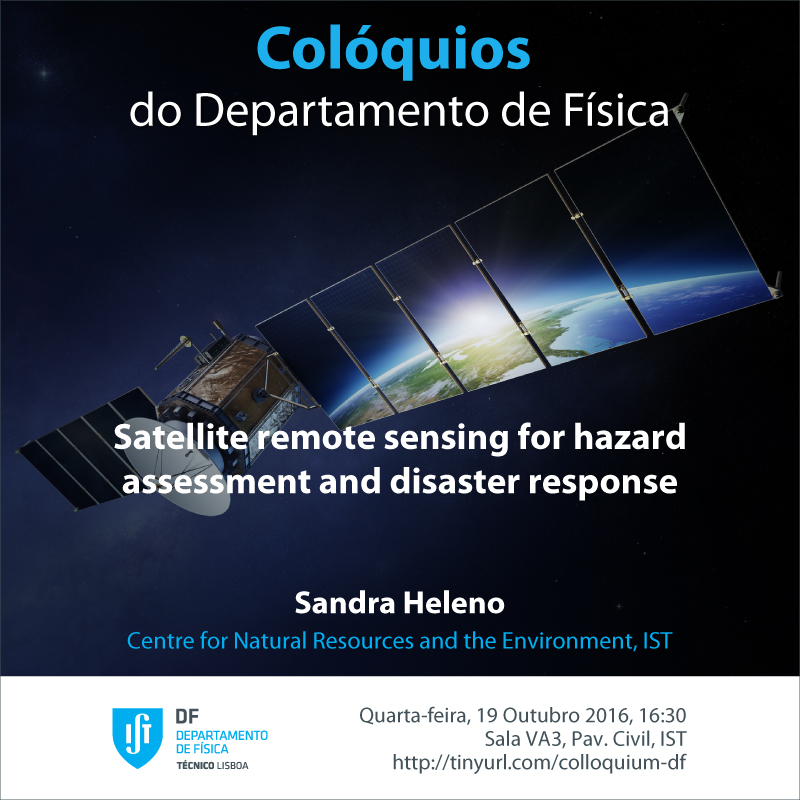 "Matter meets Topology - The Physics behind the Nobel Prize"

In this colloquium we argue that it is, in fact, quite the opposite and show how these ideas are used to describe the physics of real materials. 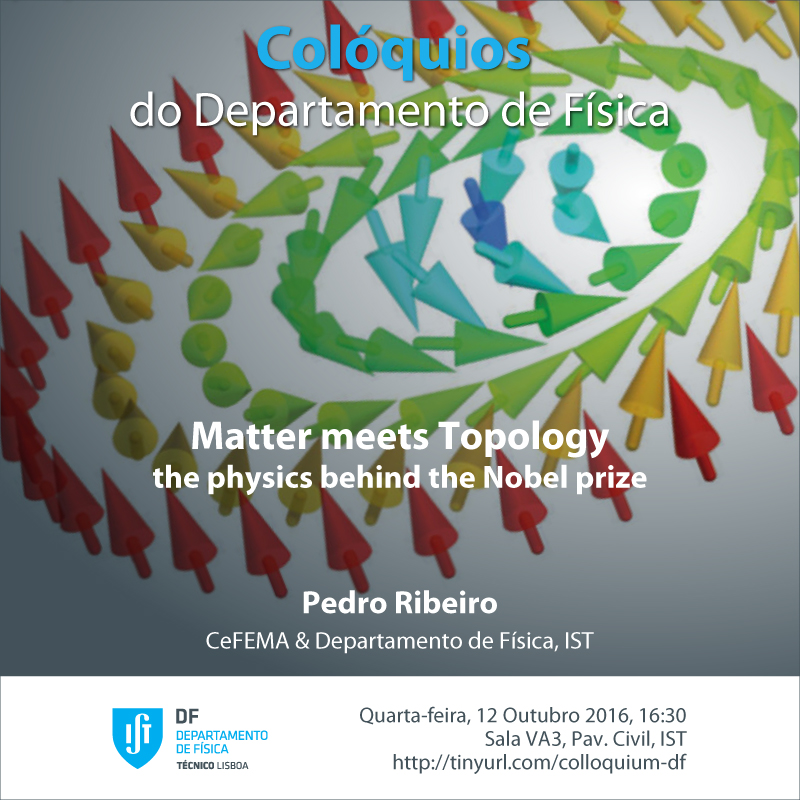 The first example is the Quantum Size Effect. Quantum size effects (QSE) become pronounced when the thickness of a metal film approaches the de Broglie wavelength of the confined electrons. QSE lead to an oscillatory behavior of physical properties as a function on the thickness of the metallic film. We have studied the influence of QSE on the work function of Pb islands grown on Si(111). The measurements show an even-odd oscillatory dependence of the local work-function difference on the island’s height], in good agreement to calculations [1].

The second example are molecular layers, where the work function measurement yields information about step edges and other line defects as well as the orientation of the molecular layers [2].

The third example are vicinal Si surfaces. Stepped well-ordered surfaces are important nanotemplates for the fabrication of one-dimensional nanostructures with intriguing electronic properties, for example they have been candidates for Luttinger liquid behavior. For the Kelvin probe force microscopy experiments we obtained – on stepped surfaces - unprecedented atomic resolution. DFT calculations allow us to interpret the experimental KPFM data in terms of specific structural features and the electronic properties of the surface. The distribution of surface dipoles is mainly governed by the Smoluchowski effect and is in agreement with the measurements even without including the influence of the tip [3]. 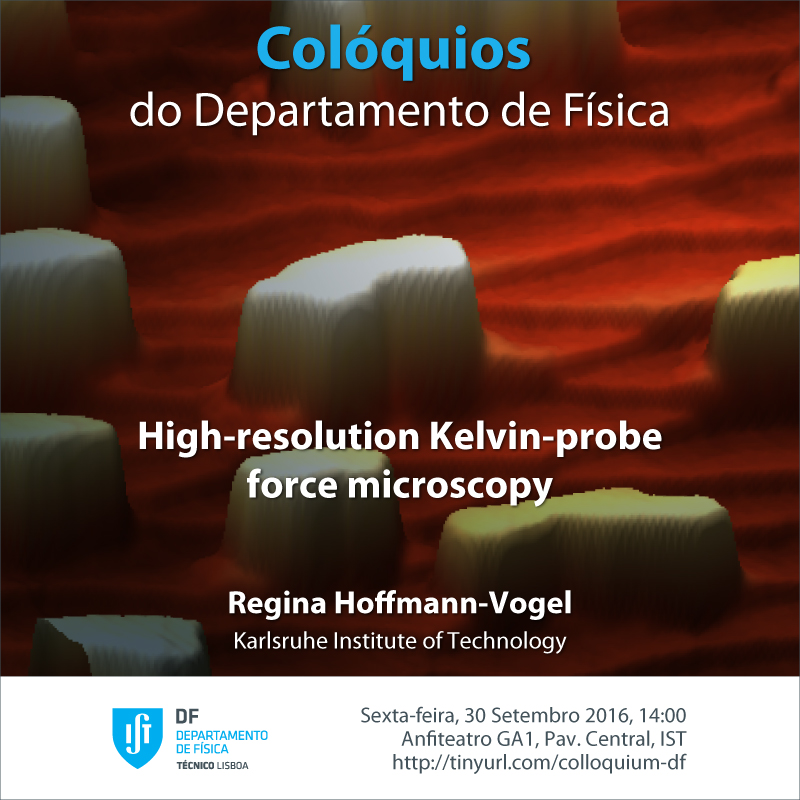